Create an Account - Increase your productivity, customize your experience, and engage in information you care about.

Board of County Commissioners 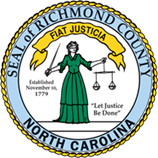 Meetings are open to the public.

The Richmond County Board of Commissioners is a 7-member board elected to serve 4-year terms. The Commissioners are all elected at-large rather than by district, and the terms of office are staggered so that 4 members are elected during an even-numbered election year, and then 3 members are elected two years later on the next even-numbered election year.